Learning from the Frontlines of Disaster—The Pointe Au Chien 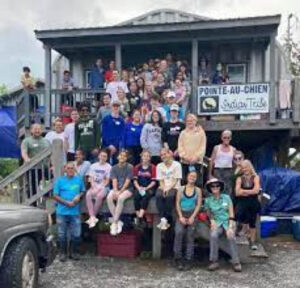 It’s been more than three months since Hurricane Ida pummeled Louisiana and took many coastal communities along with it. While much of America, and Louisiana, have moved on, some communities remain in the dark, their people homeless, their homes destroyed. 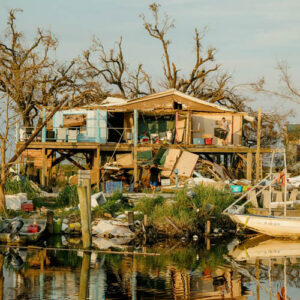 In September, I joined a group of about 50 other Tulane students to volunteer in Terrebonne and LaFourche Parishes, about two hours south of Louisiana, to volunteer with the Pointe-Au-Chien Indian Tribe community. Besides a camping trip in Grand Isle, one of the southernmost points of Louisiana, I had never really stopped in the small communities along the way. My first time stepping foot in Pointe-Aux-Chênes, where the tribe lives, was to see how Ida devastated their homes. Most of the houses, set up on stilts sometimes 20 feet high, had been standing for over 40 years. They’ve seen many storms, but none as devastating as Ida. Of the 80 homes in the community, only seven were livable after the storm. It didn’t matter that “power” has technically returned to all Louisianans since the storm—there were no more homes left to be powered in Pointe-Aux-Chênes. As I cleared out his house of rubble and debris, a tribe member told me about the changes he has seen over the years—the strip of land he used to walk across to get to his cousin’s house, which usually collected about a foot of water after a rain, was now an uncrossable-by-foot bayou. He now fishes there. 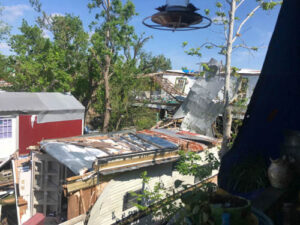 I spent the day “mucking and gutting” a house—throwing away every single piece of debris, furniture, and sentimental item left in a home of one of the tribe members. Shocked by the loss this community felt, I went back to my home in Uptown New Orleans and continued school.

In early December, I returned to the Pointe-Au-Chien. Not much had changed since my first volunteering trip. This time, I spent the day cleaning up a yard lot. The house on the property had been reduced to its frame, the trailer in the front yard toppled over, and debris was scattered everywhere. I chatted with a tribe member, Brian, for the entirety of the day as I picked up his parents’ belongings that had been scattered throughout the yard, unsalvageable. He told me stories of his travels around the world as a welder on numerous oil rigs, his life’s regrets, his proudest crab catches, and his road to sobriety (he now sponsors many young people on their journeys). At the end of the day, members of the tribe had cooked all thirty-plus volunteers a fresh, full pot of jambalaya.

I’ve spent four years studying environmental injustices, systemic mistreatment of Indigenous people in Louisiana, worsening effects from intensifying storms, and disappearing wetlands. But I was finally seeing and hearing it all firsthand, beginning to understand just how fast and drastically climate change was devouring the coast, and how it was disturbing entire communities. Many Americans don’t realize that Louisiana even has numerous Native American tribes; Louisiana is home to over 11 state-recognized tribes. Despite this, many of these groups, including the Pointe-Au-Chien, have still not received federal recognition. Therefore, it is much harder to recover after devastating storms like Ida. The tribes are forced to rely on volunteer work, which can be slow and tedious. Though hit by intense hardship, the Point-Au-Chien are resilient. They plan to rebuild after the debris is cleared and what remains of their homes has been demolished. The tribe has organized a fund drive for relief and rebuilding after Ida that has raised nearly $200,000 so far. Far more is needed, so please consider giving. These communities are on the frontlines of the climate crisis and can serve as models — and as warnings for the coming years if we don’t act fast.

Sara Heimlich is a senior at Tulane University majoring in Environmental Studies and Political Science, with minors in History and Psychology.