It is What it is: An Activist’s Rebuttal

As our media descends into a whirlpool of polarizing bad news, it is no shock that the average person has adopted the nihilistic mantra, “it is what it is.” The systems that have put us in this climate predicament are powerful, intertwined, and very skilled at discouraging the average citizen who is just trying to carry on. It seems the best an ordinary American can do is shrug, and full of good intentions, keep climate change, along with other world problems, on the back burner.

I have been at UC -San Diego (UCSD), where the undergraduate population is around 34,000 students, for three years now. Creating effective student-led change when there are that many students seems utterly unattainable.

Our student body is often frustrated with our Housing, Dining, and Hospitality (HDH) department, but it is so powerful, bureaucratic, and frankly, hostile, that most students feel powerless when trying to advocate for their needs — whether better working conditions, healthier food options, or less expensive housing. The UCSD student body accepts that HDH is an evil, ruthless entity that will never listen. “It is what it is.”

I disagree. Find something you care deeply about and want to change. Find allies. Then begin. 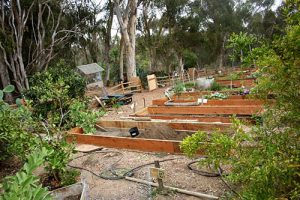 I am passionate and concerned about food waste; my RCC Fellowship project is to make composting more accessible to the student body. UCSD is blessed with a network of student gardens spread across campus, many with composting systems. Unfortunately, these garden gems are in faraway, hidden places, that most students will not find, or be willing to venture to.

It is well understood that environmentally-friendly behavioral change will not happen on a large scale unless it is made convenient. Knowing this, I had a choice: accept “it is what it is,” or try to do something about it. There had been many failed student composting projects in the past, but I was determined to find a solution. I never did like the phrase “it is what it is.”

I found a group of students who cared about food waste the way I did, and we researched, planned, communicated with staff, and figured out a new approach to making composting convenient. Unfortunately, that required cooperation with our least favorite entity: the infamous HDH. It controlled the places that students conveniently visit every day: markets and dining halls. I wanted access to those locations.

During the summer of 2022, I proposed the idea of a food waste drop-off site at HDH locations, such as the Market where I have worked since my first year. Here’s how the program would work: (1) I would give smaller individual buckets to students who wanted them, (2) there would be a food scrap drop-off station at the Market, and (3) I would make sure the food scraps got transported to a student garden every few days. This simple proposal was made to the head of HDH Sustainability. Unsurprisingly, I was met with a resounding “No!” This reflex reaction was supposedly backed up by concerns that I thought could easily be solved. I was discouraged, but I believed in my idea. I could have shrugged and said, “it is what it is.” But I am eternally grateful that I used that “No!” as pure motivation.

I revisited the problem with the managers at the Market, and they gave me the contact of a key ally: the person actually in charge of composting at HDH. As it turns out, luckily for me (and the students who wanted this program), the sustainability head of HDH was not the one in charge. That negative staff member was a part of “Dining Engagement,” still a mystery department to me. Nonetheless, I presented my proposal again, addressing the concerns that had been raised, and was given a green light at the end of Summer 2022. After a year of meetings, brainstorming sessions, and proposal writing, I had won permission to set up a drop-off station right outside the Market. after a year of meetings, brainstorming sessions, and proposal writing. By the beginning of October, my organization put on a festive bucket distribution and painting event. Composting and ending food waste had gone mainstream.

The pride, relief, and gratitude I felt that day brought me to tears. Seeing an idea become a tangible reality, especially when the idea had been roundly rejected, is life changing. I have not reached all 34,000 students at UCSD, but now, one idea, one project at a time, that seems a reasonable goal.

My takeaways: (1) power mapping is essential, (2) allies can be found in the most unsuspected places, and (3) the hopeless, passive phrase “it is what it is” can be proved wrong — if you are determined enough to fight your way to an important goal. Each of the RCC Fellows this year is showing their campus the resilience determined environmental youth can have in the face of a stubborn, unchanging administration; each one constantly demonstrates that you need not shrug and simply say, “it is what it is.”

RCC Fellow Julianne Luong is a junior at UC San Diego majoring in Environmental Policy and minoring in Climate Change Studies and Urban Studies and Planning. Ever since she was a child, she has had a passion for food: baking and cooking remain her biggest hobbies. This has helped her find a place within the climate crisis, focusing on food waste and food justice. Her background in youth ministry compels her to mobilize and educate kids, teens, and young adults to find what they can do to show others, especially their parents, that they care about the climate.