Help Your Child to Wonder

Recounting time outdoors with his family from Maryland to California, Musil contemplates the ability of parents and grandparents to instill in children awe and wonder for the natural world. Cultivating a child-like curiosity, Musil, his daughters, and his grandchildren “delight…in the tiniest things.” Stroking lichens in Deer Creek Lake near the Maryland-Pennsylvania border, observing backyard bees and butterflies in Bethesda, connecting to the tactile life of tidal pools at the Aquarium of the Pacific in Los Angeles, inspire the same sense of wonder that Rachel Carson fostered as she guided her adopted son, Roger, around tidal pools near her summer cottage in Southport, Maine.

When Rachel Carson published “Help Your Child to Wonder” in the July, 1956 issue of Woman’s Home Companion, her grandnephew Roger Christie, whom she adopted as her son, was the same age as my grandson, Desmond. The article is accompanied with photos of Roger walking in the woods, peering at a ghost crab, and stretched out on a sand dune. Carson urges parents (and grandparents), as she has with Roger, to share the wonders of nature with their children, to develop and maintain with them a sense of wonder. She notes, “Many children…delight in the tiniest things,” including ferns, fungi, tiny field flowers, the smell of wood smoke, or the feel of reindeer moss.

The article was then turned into a small book called The Sense of Wonder with new photos by Charles Pratt and others. It has since become a classic, still available in several editions. It is the source of several notable Carson quotes including, “If a child is to keep alive his inborn sense of wonder without any such gift from the fairies, he needs the companionship of at least one adult who can share it, rediscovering with him the joy, excitement and mystery of the world we live in.”

After this summer’s visit to the East Coast from Los Angeles by my daughter Emily, I realized how much my grandson Desmond looks like the young Roger, and how much, like Rachel Carson, my granddaughter Nora is fascinated by nature. We all took off to wooded Deer Creek Lake in the low mountains near the Maryland-Pennsylvania border where we kayaked, built bonfires, and took short hikes through bolder and moss-laden trails resembling those near Rachel’s Carson’s cottage in Maine where she rambled and explored with Roger.

Carson believed that it was more important for children to feel the wonders of nature than to be crammed full of facts at an early age. And so I smiled, watching Emily quietly lead Desmond and Nora to pat and stroke and gently touch the mosses and lichens and small plants that emerged mysteriously and beautifully from logs and stumps and rocks. Nora, older, quicker, and much more active than her little brother, soon became attached to the mossy beds, relaxing and resting on them, as if she were a creature of the woods.

My wife, Caryn, and I rambled with our daughter and grandkids, Carson-style, toward Muddy Creek Falls, a 53-feet high waterfall, the highest in Maryland, where the great naturalist and writer John Burroughs had explored and camped with Henry Ford, Thomas A. Edison, and Harvey Goodyear a century before. Along the way, we marveled at small buds and wildflowers, chipmunks and their tiny entrances to a world of cozy homes beneath the ground, and the wondrous mosses, lichens, and wintergreen that amazed Nora and Desmond because the broken leaves smell just like chewing gum.

I was reminded of how frustrated Caryn and I were at first when our own children, Emily,  and her sister Rebecca, were small and toddling. Before children, we had camped and hiked and birded and botanized at will, covering many miles each day in the woods and mountains. With hour- long “hikes” that sometimes involved a few hundred yards’ amble from state park playgrounds, we were led to slow down, get close to the ground, observe and touch gently, and like our children, to delight in “the tiniest things.”

It is when a world of moss and mushrooms, of bugs and bunchberries, first opened up to us. It is when I first began to look at the ground as a living organism (or a world of fairies) best seen lying on the ground — even better aided by the magnifying lens in my old Swiss Army knife. It is why I still recall the marvelous discovery of things previously unknown, non-existent, invisible, to my hurried, adult, urban eyes. As I toddled, not far from the park playground, along with my children, they were the ones who first excitedly showed me the miraculous, minute ranks of marching, red-coated lichens called British soldiers.

Rachel Carson also believed in cultivating a sense of awe, as well as wonder, in the face of nature. She wrote often of our need to love and care for the earth and its creatures, large and small, because they had evolved over eons, emerged from the sea, and, if destroyed, could never be recreated. Carson wrote about the roar of the sea and the changing tones of the tides. But as my little band of nature explorers approached, and then peered out, literally, in awe at Muddy Creek Falls, it was the surrounding sound that captivated Nora and Desmond as the flashing falls plunged thunderously through ancient rocks where the Youghiogheny River had carved out its path over thousands of years.

Once exposed to the delights of nature, children seem to want to find even more around them, even in the most suburban and urban settings. In backyard Bethesda, my grandchildren have begun to look for bees and bugs and butterflies among the milkweed, on the butterfly bush, or pretty much on any flower at all. Looking at tiny things has, I think, given them a sense of kinship and protection for almost invisible things like glimmering, emerald sweat bees, or the incredibly fragile looking crane fly. In Los Angeles, Nora has learned to master looking through binoculars at her resident Black Phoebe or to stand, with Desmond, on an evening walk, captivated by the repeated, haunting hoots above them of male and female Great Horned Owls calling to each other in differing tones and timbre from the pine trees near their house. 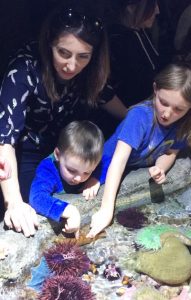 Desmond and Nora are as far away as you can get from Rachel Carson’s summer cottage in Southport, Maine where she carried Roger to the shore and explored the tidal pools with their surprising, squishy contents. But even across a continent, my grandchildren can share the same sense of wonder outdoors or even at the Aquarium of the Pacific. There, gently guided by their caring Mom they can feel, as Rachel and Roger did, inside a tidal pool. They are enrapt by the feel of sea anemones and starfish, the sighting of a sea horse, or the chance to reach out to share some common bond, some unspoken communion, with the fish, the rays, and eels who peer back through the glass at the lively girl and the curious little boy.