Any Good News Since Rachel Carson?

The environmental movement gained momentum following Rachel Carson’s Silent Spring in 1962. That was sixty years ago. I am twenty. Since I can remember, my perception of the world has been clouded by the looming threat of man-made pollution and climate change. I was in kindergarten when I was introduced to deforestation. Ever since, I have only seen the world around me sick from carbon emissions and littered with plastics. While living in China, I remember checking the air quality with my fourth-grade teacher and hoping, with the rest of my classmates, that the air quality index, usually between 700-800, would be below 500 so we could go outside for recess. The index measures PM2.5 particles, about the size of red blood cells, that can enter directly into the blood stream and lead to cardiovascular disease and heart attacks. I had been living in and breathing air pollution nearly twenty times the U.S. EPA daily standard of 35 micrograms per cubic meter. 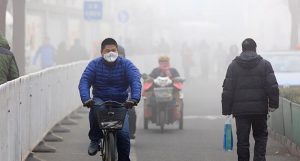 Nevertheless, like many people my age, I feel a responsibility to make a difference. I recycle, march, sign petitions. I took a gap year to clean beaches and teach kids aged 3–16 about the dangers of microplastics. I go to Duke and study Environmental Science & Policy. I educate myself and others about current climate trends and how they affect us. I have read and shared the comprehensive IPCC reports that are the scientific consensus on climate science used by policy makers. I’ve stopped eating pork, consuming dairy, and very rarely choose poultry or beef. I shop locally and second-hand.

What is there to show for all this? Recent reports actually found microplastics in our blood. COP26 achieved little. There are 450,000 factory farms, or CAFOs, in operation across the United States and fast fashion has become increasingly trendy. I can’t help feeling overwhelmed by the fate of the world that seems to rest on my shoulders.

When this happens, I go outside and seek solace in nature. Wherever I am, I go into nature and remember why I make the choices I do. If I’m in a city, I find the biggest park I can. In New York City, it was Central Park. I would go into the densest areas so that I could imagine I was no longer in an overcrowded city. In Miami, it was the beach. I tried to block out industrial sounds and listen to the birds or waves. I would take the time to get empowered by nature. I use the beautiful complexity of life to recharge and regain momentum. I reemerge, am connected, and equipped to take on more.

As Rachel Carson said, “Those who contemplate the beauty of the earth find reserves of strength that will endure as long as life lasts.”

But sometimes, when I don’t have access to natural areas, I become burnt out, tired of doing things that seemingly have no impact on the reality around us. So, I look for good news.

Good news is hard to come by. Negative, depressing, fear-invoking stories sell. There is no quick or band-aid solution for such an intricate, interdisciplinary issue as climate change. News outlets capitalize on this and publish informative, but gloomy stories. They don’t consider the psychophysical consequences for their audiences. Being constantly surrounded by discouraging news, reports of environmental devastation, photos of starving polar bears, and aggressive misinformation is exhausting.

That is why I look for and try to share encouraging, positive stories that give people optimism. So they see that they are not alone in their struggle, that their work is not for nothing. Celebrating environmental progress that is being made is essential for holding on to our goals and agendas. It keeps us grounded. It illustrates the power we have together. So, let’s cheer for four of my recent favorites.

In early June, the EPA announced that it is working on a proposed rule that will restore the rights of states and tribes to block projects on environmental grounds, which were removed under Trump’s ruling. The proposed rule gives Indigenous people and states the power to veto gas pipelines, coal terminals, and other energy projects that pollute their rivers, streams, and land. In 2020, Trump’s EPA administrator and former coal industry lobbyist, Andrew Wheeler, said that the agency would move to “curb abuses of the Clean Water Act that have held our nation’s energy infrastructure projects hostage, and to put in place clear guidelines that finally give these projects a path forward.” This came shortly after Trump’s push to promote “efficient permitting processes and redu[ing] regulatory uncertainties that currently make energy infrastructure projects expensive, and that discourage new investment”. Trump directed the EPA to revise the permitting rules of the Clean Water Act, calling them “outdated.” This change limited state and tribal rights to protect the integrity of their water quality and implemented an unrealistic time restriction that made evaluations of complicated projects impossible. Although there is tremendous pushback from the fossil fuel industry, the proposal is expected to be complete by Spring of 2023 after a period of public comment (due August 8th of this year). To participate in public comment and share your support, click here.

Then, on June 14th, the House approved the Recovering America’s Wildlife Act (H.R.2773), the largest investment in U.S. wildlife conservation since the Pittman-Robertson and Dingell-Johnson Acts. It has been sent to the Senate for review. The bill is co-sponsored by 152 Democrats and 42 Republicans, demonstrating that conservation efforts can be non-partisan. The bill will give $1.3 billion to state fish and wildlife agencies to fund science-based wildlife action plans. It will also dedicate an additional $97.5 million to tribal fish and wildlife managers who protect fish and wildlife on tribal waters and lands, and fund federal endangered species recovery planning with states and tribes. The bill recognizes the importance of Indigenous knowledge and united conservation work. It will create an estimated 33,000 jobs yearly while restoring natural infrastructures, connecting communities, and making areas more climate-resilient. It will also save taxpayer money, as “emergency” efforts to save an endangered species are more costly than implementing a preventative effort before a species becomes endangered. You can support this bill by urging your representative to pass the Recovering America’s Wildlife Act here.

Next, on June 15th, Secretary of the Interior Deb Haaland announced the launch of the first-ever Tribal Advisory Committee, which will allow tribal leaders to have direct and consistent contact with department officials. The committee will act as a bridge, facilitating conversations about intergovernmental responsibilities, varying political ideologies and views, and protecting tribal rights and voices. The representatives of tribal regions will have access to the present and future Secretaries of the Interior, making consultation with and for tribes transparent and more democratic.

A day later, on June 16th, New Jersey filed a lawsuit against the Ford Motor Company for allegedly purchasing 400 acres of Ringwood Mines to dispose of its waste from their automobile plant. The state is suing Ford on eight counts, including negligence and trespassing, stating that they contaminate hundreds of acres of land and have risked the health of about 200 residents, almost all Native Americans of the Turtle Clan. The area of Upper Ringwood was declared a Superfund site in 1984 and again in 2006. It is the only area to be listed as a Superfund twice and is still among the most toxic places in the nation. In addition, the residents of the area are plagued with cancer and other illnesses. On top of this, starting around 1970, the company started selling some of the land without disclosing the damage they had caused. The lawsuit seeks caused a full environmental restoration of the area, compensation for damages, and monetary relief as the court deems appropriate. This lawsuit, if won, will protect the Turtle Clan, the environment, and New Jersey’s water.

These four hopeful news reports are not the full solution to environmental devastation and pollution, but they do show that change is possible, that our actions can make a difference. We have a lot to do, and we need to be patient, find solace in nature, and restore and reinforce our environmental commitments. But change is happening. We can celebrate that. Take time to gain strength from these stories so that you and I can get back out there and keep on fighting for more. We are stronger together; we are not alone.

Lily Samuels is a sophomore at Duke University, intending to double major in Environmental Science & Policy and Economics with a minor in Computer Science.