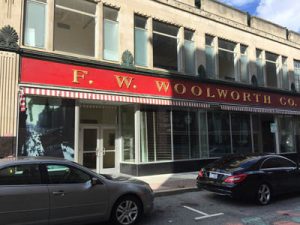 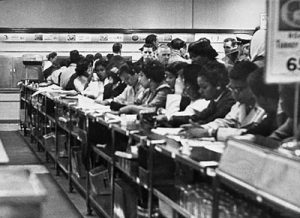 The civil rights sit-in movement that led to the Student Non-Violent Coordinating Committee (SNCC) began on February 1, 1960 when four African American students from North Carolina Agricultural and Mechanical University in Greensboro, North Carolina, were refused service at the whites-only lunch counter at the downtown Woolworth’s, now the International Civil Rights Center and Museum. The Greensboro Four, as they have become know, were then joined by other college students sitting in at the counter, including women from nearby Bennett College, one of two historically-black women’s colleges in the nation.

Given its historic role and mission, Bennett College has made environmental justice a part of its contemporary concerns. This fall, Dr. Gwendolyn Bookman, Chair of the Department of Social and Behavioral Sciences, arranged for RCC President Dr. Bob Musil to deliver the all-college A.C.E.S. lecture in Bennett’s historic Annie Merner Pfeiffer Chapel. The program was presided over by Dr. Valerie Ann Johnson, Mott Distinguished Professor of Women’s Studies, Africana Studies and the Honors Program. Musil was introduced by student Ashley Bryant,’19. In his address, Musil noted the role of Bennett women in the sit-in movement and called on them to continue their activism and leadership today. “I am honored,” Musil said, “to stand in the very pulpit where Dr. Martin Luther King spoke to you just before the historic 1963 March for Jobs and Freedom.”

Dr. Musil said that he was deeply inspired by Dr. King, whom he heard speak at Yale’s Battell Chapel when he was a freshman. Repeating King’s famous quotation, drawn from the abolitionist preacher, Rev. Theodore Parker, that “the moral arc of the universe bends long, but it bends toward justice,” Musil added that in today’s climate of renewed reaction and racism, we must all work to bend that moral arc faster and further. Explaining briefly to a new generation of students who Rachel Carson is, Musil explained that he, and the Rachel Carson Council (RCC), were inspired by both King and Carson, and that a commitment to environmental justice is the result. Carson, Musil explained, worked in graduate school at Johns Hopkins with two famous white biologists who publically denounced the then prevailing racist theory of eugenics and joined the NAACP. Later, in 1957 as Rachel Carson was beginning work on Silent Spring, her close friend and literary agent, Marie Rodell, helped publish the first book — Stride Toward Freedom — of a then little-known Baptist preacher, Martin Luther King.” 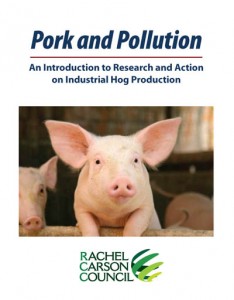 In today’s North Carolina, Musil noted, the Rachel Carson Council has worked in coalition with other environmental justice groups and has published reports on the environmental and climate justice implications of hog and chicken factory farms, of the Atlantic Coast Pipeline and related natural gas infrastructure, and of the manufacture of industrial wood pellets that comes from clear-cutting forests. In all these cases, those most directly harmed by the pollution and destruction that ensue are usually low-income people and people of color, including African Americans, Latinos, and indigenous people like the Lumbee Nation.

But education, organizing, and protesting are not enough, Dr. Musil maintained. He called on Bennett women, once again, to use these and other tactics, but finally to engage in politics and to vote to throw out those who allow such environmental injustices to continue unchecked.

In an emotional conclusion, Musil quoted Rachel Carson’s only Commencement Address, given at Scripps College for Women in 1962, where she concluded, “…your generation must deal with the environment.” “That was addressed to my generation,” Musil intoned, “and that was two generations ago!” You and I must work together to make the moral arc of the universe bend faster and to bend toward justice, he added. “I hope I have two decades left in me and when one of you is Governor of North Carolina, or President of Bennett College, I will be proud to return and be wheeled in to this chapel to celebrate with you the progress you have made.”

During his time at Bennett, Dr. Musil also met with a select group of Bennett students, as did Dr. King, and signed up 20% of the student body to become active with the RCC, as Bennett College became the 50th college to join the Rachel Carson Council Campus Network.