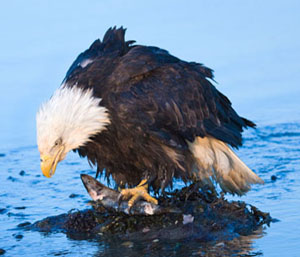 Where the Eagles Soared: Are We Losing Our Land and Our History?

I saw my very first Bald Eagle decades ago. It was not soaring majestically but pecking and pulling on a fish by the shoreline of the Blackwater National Wildlife Refuge (NWR) in Eastern Shore, Maryland. I have fond memories of going around Blackwater with my daughters, then little kids. Among other sightings, they were thrilled to count off dozens upon dozens of turtles that my wife and I had stupidly offered to give a dime each to Rebecca and Emily for every one they spotted. 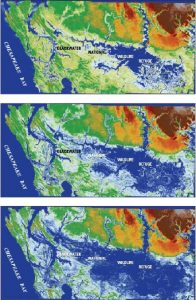 Much later, I recall, too, my rising anger as I sat in an early EPA climate conference in Atlanta during the 90s. I was watching a presenter click through slides whose maps showed my very own Blackwater NWR slowly disappearing under water as projected sea-level rise from global climate change erased the eagles, the turtles, the Snow Geese, the Tundra Swans, and some of my fondest memories.

I have roamed the Eastern Shore many, many times with other memories stretching back to the time when Caryn and I, long involved with African American history and civil rights, were happy to find a lone historical marker about Frederick Douglass in St. Michaels. It seemed to be the only recognition we could find then of the contributions of Douglass, Harriet Tubman, Henry Highland Garnet and other leaders of the resistance to slavery whose actions and voices had soared majestically above the fields and rivers and shorelines of Maryland. 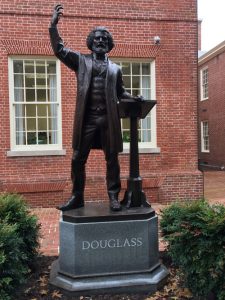 In those earlier years, I must have kept environmental issues and civil rights somehow siloed in my mind. Their intricate linkage in what we now call environmental justice only came later. So, too, slowly, did growing, visible recognition for the long freedom struggle of African Americans. I have newer memories now of standing awestruck before the magnificent statue of Frederick Douglass in front of the Talbot County Courthouse in Easton where, gesturing to the ages, he is eternally giving one of his most powerful orations. And I was near tears my first time through the Harriet Tubman Underground Railway Visitors Center, run by the National Park Service. It stands proudly at the edge of the Blackwater NWR. 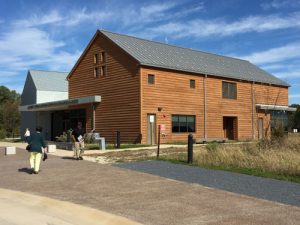 Tubman, Douglass, Garnet are all there with arresting bronze replicas of Tubman leading enslaved Americans north to freedom again and again, fishing and hunting in the estuaries of the Eastern Shore, spying and fighting for the U.S. Army during the Civil War, and more.

Today, long after I saw my first eagle, all this is slowly being erased, as on the climate maps of sea-level rise, since heavy rains and storms are now more frequent and flooding periodically washes across the streets, yards, homes, bridges, wildlife refuges, former plantations, and proudly displayed history of the once enslaved people who have led the way toward freedom for our nation. 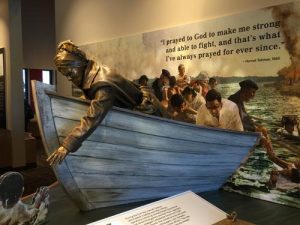 The land, the wildlife, the history of this swath of low-lying, earliest-settled section of the United States along the Chesapeake Bay is critical to all Americans. It is also emblematic of a far larger problem in the U.S. — the loss of coastal areas where much of our population and our history is found — in the face of global climate change. And, of course, in much of the world, sea-level rise, storms, flooding, climate refugees, and the loss of entire island nations are far worse.

But for me, starting to lose the places that I love, that hold my cherished memories, makes the climate crisis more immediate, more emotionally telling. Rachel Carson, and then Shirley Briggs, who ran the Rachel Carson Council before me, labored mightily to rid the land of DDT and other chemicals that drove the iconic Bald Eagle — along with pelicans, Peregrine Falcons, Ospreys, and more — nearly to extinction. They were just recovering when I saw my first eagle eating that fish. Now, though protected by Federal law, they will be threatened again, but by the loss of habitat. Birds of all kinds have declined by over 30% in North America since I first went birding in the early 1970s. But you would not know that, or the dire implications for all species, and for us, unless you kept careful track of bird counts and migrations. On the surface, things still seem serene, pastoral, historic and unchanging in places like the Eastern Shore. 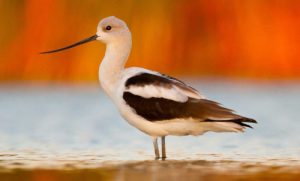 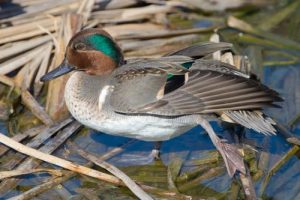 This fall, even as my wife and I headed for a getaway weekend for wildlife and history, the very first thing we came upon was a Bald Eagle standing in a field, in full view, unnoticed by a small line of cars that had stopped to watch a pack of some twenty turkey vultures finish off the remains of a deer. Not long after, our spectacular close view of a Bald Eagle was repeated as another waited patiently in a field to share, or maybe steal, some of the carrion being pecked at by a smaller bunch of vultures. As we then toured Bombay Hook NWR in nearby Delaware, we marveled at the profusion of ducks – shovelers, Green-winged Teals, American Wigeon, pintails, Mallards, Black Ducks, in the ponds, along with shore birds throughout the mud flats – godwits, Pectoral Sandpipers, Semipalmated Plovers, and most spectacularly, some fifty American Avocets — long-legged, black and white wading birds with upturned bills that sport orange, curved necks in spring and summer, though now turned to dull off-white for the fall fashion season. Then, as if to bid us farewell in the fading light of the setting sun, a full-coated Red Fox, with its stylish black stockings, trotted up to our car to stand and watch us as we grinned and smiled and looked right back at it. Nature and our new memories seemed totally unperturbed.

Until the next day when unrelenting rain reveals the new normal and a glimpse at our climate future. We slosh through deepening puddles and minor flooding as we walk around historic Chestertown, Maryland. Chestertown thrived in the nineteenth-century before trains and highways and then airplanes passed it by, leaving a charming, preservationist’s dream village with Federal-style brick homes, old churches, inns, and Washington College, the nation’s tenth oldest. It was founded in 1782 with help from our first President, who gave funds and sat on the Board of Visitors and Governors, because he believed a well-educated citizenry was essential to democracy. 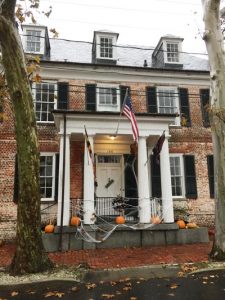 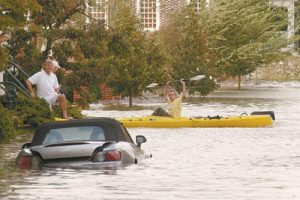 We huddle now, seeking respite from the rain, on the Halloween-decorated front porch on the elegant home of the Washington College President. It stands on aptly-named Water Street, with property that runs down to the slowly rising Chester River. Washington College, like many institutions in the area has begun to confront both climate change and the role of slavery in its founding. The college makes clear that the profits from the work of some 4,000 slaves provided the wealth of most donors to the institution whose first buildings and bricks were produced by enslaved workers. The first President, William Smith, D.D, owned at least two slaves himself and traveled widely with his personal favorite, a man we only know as “Primus.” But the President’s home, like other grand houses along the Chester River, now at times, finds parts of its property an inundated extension of the river. 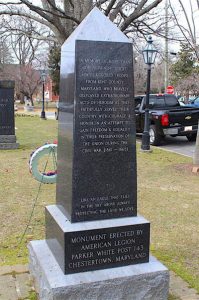 Other parts of our history and of modern Chestertown will eventually be lost as well. Not far from the President’s home stands a small building housing a branch of the Grand Army of the Republic (GAR), a venerable veterans’ organization for Union soldiers. But given the racism and segregation that continued after the war, the Civil War service of African Americans in the Union army was not recognized by the GAR. African American veterans from the Chestertown area protested, raised funds, and finally opened their own Charles Sumner branch in the current structure they built in 1908. And even later, in 1999, the entire town — which had had only a 1917 Jim Crow-era Civil War monument with white Union and Confederate soldiers listed on opposite sides of a granite slab — finally erected a black marble obelisk honoring the more than 400 local African American Civil War soldiers who had died fighting for the United States in order to gain their freedom. 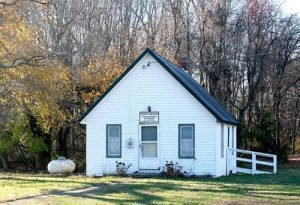 A monument of sorts to the struggle for education by black Americans can also be found well outside of Chestertown along the way to another home of eagles – Eastern Neck National Wildlife Refuge. The African American One Room School House and Museum housed the only school of any kind (it went to the sixth grade) for African Americans — who walked up to six or seven miles to get there from around the county — from 1868 until 1958, when it was closed. Local residents, who fought its being torn down, still maintain and proudly show off the small school museum adorned with memorabilia and black history. 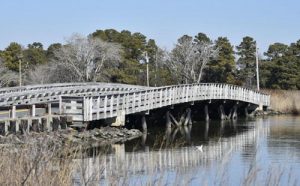 But it, too, sits on land essentially at sea-level as the Chesapeake Bay and rivers and estuaries rise, the rains increase, and the climate shifts. We drive on, still in steady rain to the narrow wooden bridge that leads to the entrance of Eastern Neck NWR. I slow and hesitate to cross as rising water nears the bottom of the low bridge. I learn that Eastern Neck has been closed off many times as the bridge and surrounding land have flooded and not only during hurricanes when the surge of wind and water is at its worst.

An older park volunteer is on duty at the Visitors’ Center. We have the home of eagles to ourselves today. We talk of the majesty of the eagles, the decline of ducks and shore birds we have observed over the years, and the slow rising of the water that some day will wipe this part of America — its land, its wildlife and its rich history of a continuing fight for freedom — entirely away.

We step outside to find, for now, the rains have ended. Bright sunshine brings slight mist off the fields and burnishes the foliage of fall. As if to cue some swelling theme music of hope and renewal, butterflies appear around us. First some small cabbage whites, then a Buckeye with its owl-eyes and tiny orange epaulettes, followed by a cream, brown and gold stained-glass Variegated Fritillary, and, finally, a single orange-and-black striped Monarch searching, perhaps, for its migratory partners as they seek to carry on life for new generations. 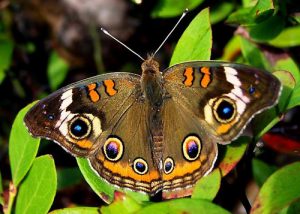 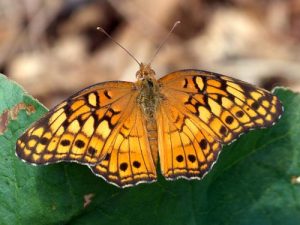 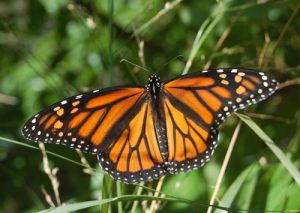 The migration of Monarchs was one of Rachel Carson’s final, fond memories in Maine as she knew that she was dying while writing Silent Spring. The world of chemicals and nuclear testing, of dying robins and vanishing eagles, of polluted air and burning rivers must have seemed at times the stuff of utter despair. But despite her pain, Carson gave others hope and, after she was gone, they carried on. We cannot know today whether we will be at all successful in staving off disaster for all that we love in the face of climate change. But the struggles for freedom of African Americans against insufferable odds on the Eastern Shore and the continuing quest for life of the eagles and ducks and foxes, and even butterflies, that we find there, mean that we must try.