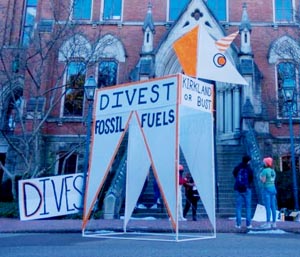 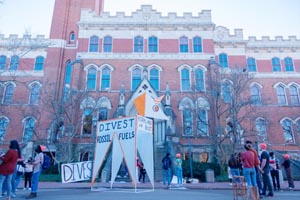 DivestVU and Dores Divest held an approximately 30-person protest today from 2:15 to 3 p.m. CST. The protestors marched from Library Lawn to Kirkland Circle in support of divestment of the university endowment from fossil fuels.

The Graduate Student Council (GSC) and Vanderbilt Student Government (VSG) have both passed resolutions supporting divestment from fossil fuels and had representatives at the demonstration.

The march began at approximately 2:15 p.m. CST on Library Lawn. Members of Dores Divest erected a 14-foot tall unicorn painted orange, which the organization called Danny. The unicorn’s front read “Kirkland or bust,” its sides read the words “Divest Fossil Fuels” and its rear read “-0.1% endow return.” The rear references the university’s 2020 Financial Report, which outlined the loss of 0.1 percent on its endowment return. Two marchers carried the unicorn to the sidewalk in front of Kirkland Hall— along the way, the head got snagged on a few tree branches.

Students who wished to participate in the march were required to sign up beforehand. The participation limit was 40 people, per DivestVU co-founder Emily Irigoyen. The protestors wore orange beanies, the national color for divestment, for identification purposes, per an anonymous Dores Divest member.

“This is one of the most time-sensitive issues you can get involved with on-campus,” first-year Christina Perez, who attended the march, said. “I think that Vanderbilt has all the resources that we need to go without fossil fuels, and I think it’s a right time for a call to action.”

Dores Divest undergraduate president Ben Hayden said organizers had to turn away over 200 students who expressed interest in protesting. 02-23-21