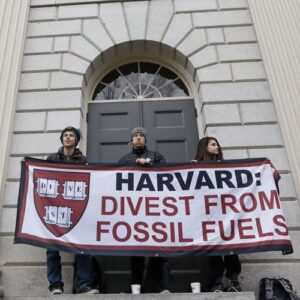 Driven by ambitious student bodies across the country, the fossil fuel divestment movement has gained tremendous momentum in recent years. In the last school year, Boston University, Dartmouth, Harvard, University of Maine, University of Minnesota, and Vassar College are just a few of the colleges and universities that have joined the growing coalition of climate-minded institutions that have pulled investments out of coal, oil, and gas. With the largest one hundred university endowments each worth over a billion dollars, colleges have made significant contributions to the 40 trillion dollars that have been divested from fossil fuels.

Representing the forefront of innovation, information, and the education of future generations, it is critical, as climate change risks grow, that universities demonstrate real leadership. Student climate leaders have worked together to petition, protest, and demand that their schools take action to preserve their future. But despite often being at the cutting-edge of climate science, most universities still resist student bodies who urge their university to divest fossil fuels from their endowment.

In September, Harvard University finally divested it’s 41.9 billion dollar endowment fund, the largest in the nation. This was influential news because of the school’s status and the large sum of money. But the decade-long history of divestment campaigning at Harvard also made this particular victory a particularly useful example for students and administrations across the country.

Founded over a decade ago, Fossil Fuel Divest Harvard (FFDH) had been taking creative, provocative actions that have gained the support of political figures like presidential nominee Elizabeth Warren. In 2014, Harvard students filed their first lawsuit against the school, alleging investment in fossil fuel companies breached the university’s fiduciary and charitable duties as a nonprofit organization. In 2019, FFDH teamed up with students from Yale to storm the field at the rivalry Yale-Harvard football game, demanding divestment from fossil fuels. The campaign has been hard-fought, driven by relentless student action.

That last September, Harvard announced it would “allow its remaining investments in the fossil fuel industry to expire” was a huge win for FFDH. Their victory demonstrates that students have the power and capability to change the financial decisions of even the wealthiest universities. And their triumph proves that Harvard’s directors agreed that divestment is both a step toward climate justice and economically beneficial to the school. Their decision carries powerful symbolism and leaves other institutions with nowhere to hide.

Harvard’s divestment has put significant pressure on other administrations who have delayed significant action. If an institution as acclaimed as Harvard has made the decision to divest, why shouldn’t other universities follow suit? That’s what student organizers decided at venerable Vassar College. After a 10-year push, divestment was announced at Vassar soon after Harvard’s divestment hit the news.

Melissa Hoffman, a student advocate with Vassar Divest, said that timing was everything. “We wanted to make sure the timing we spent campaigning was effective. Our group did not want to always take over the voice of activism on campus when there were other groups who had a lot to say.” Their opportunity came when there was outside pressure. “After Harvard divested and it was getting a lot of attention in the news, we could rally their success as a way to pressure Vassar into divestment.”

Hoffmann explained that Vassar Divest had organized email campaigns, held rallies, written articles for the newspaper, and collaborated with other groups in effort to sway the board of trustee’s opinion. But they kept running into roadblocks. The trustees would constantly reject their proposals because of their “fiduciary duty” to make as much money as possible for the school, even though investment decisions often involve many other motivations. However, Harvard’s divestment gave her group a clear window to ramp up the campaign’s presence on campus, finally leading to victory at Vassar.

What Are Endowments For? 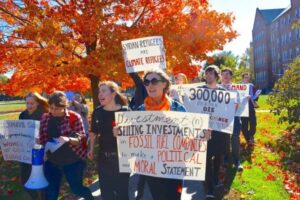 The concept of “fiduciary duty” for board of trustees has been heavily criticized in recent years, with many describing Harvard as “a hedge fund with a university attached.” College administration’s focus must first and foremost be on education and research, rather than expanding their endowment through investment.

At the end of FY 2020, American universities’ endowments totaled almost 700 billion dollars. At Harvard, only 5% of the endowment contributed to salaries, equipment, financial aid, and research, while the remaining 95% was invested in equity, hedge funds, real estate, bonds, and other assets.

Universities are going beyond providing educational services to their students and are becoming increasingly involved in the financial sector to expand wealth. For student divestment campaigns, the evolution of universities into hedge funds is central to their critique, as they seek to remind administrations that academic achievement and community values should be the center of an administration’s focus, not constantly growing its return on investment.

In an effort even to start a conversation with the administration at the University of Minnesota, Students for Climate Justice (SCJ), organized divestment events in coalition with student government, labor unions, and other social justice groups on campus. “It was helpful when more students heard about divestment because then U of M had to listen to all of us,” said Abby Peterson, a member of SCJ.

As Minnesota students started organizing larger rallies, frustrated that their opinions were being ignored, there was finally a breakthrough. Peterson believes their persistent efforts were finally successful because of news of the success of the Harvard campaign. “Once Harvard announced divestment, it seemed ridiculous if the University of Minnesota couldn’t do the same.” Yet the students found out about their own university’s divestment through an interviewer, not from the administration that had claimed to have reached out to student groups like SCJ.

Contrary to the decade-long campaigns at Harvard, Vassar, and Minnesota, students at the University of Maine brought back their campaign during the pandemic in 2020, and in just two years pressured their administration into announcing divestment.

President of the Divest UMS team, Charlie Cooper, credits their speedy success to a positive and relationship-focused organizing environment. “Putting effort into cultivating the group dynamic is important, especially because divestment campaigns can be tiresome since it is hard to know when you will see results.” 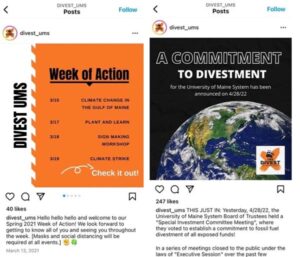 Another team member, Tamra Benson, explained that the quantity and dedication of student followers they recruited made a big difference in getting people’s attention. “We showed up at the board of trustees’ meetings with a lot of people and made our intentions very clear… and consistent presence showed them that there is energy on campus and students are passionate about it.”

Divest UMS successfully motivated their student body using a strong social media presence and persistent advertising so they could quickly pressure their university to divest. Their success and those of longer campaigns like Harvard, Vassar, and Minnesota’s are equally impressive and laudable. And they are increasing the pressure on other schools to divest.

The pressure to divest is such that backlash has begun. Recently, Republican lawmakers are developing bills to punish financial institutions that consider climate change in their dealings or take action in the climate crisis by refusing to work with fossil fuel companies. Clearly, the size of the divestment movement poses a serious enough threat for fossil fuel interests to pressure their political allies to get involved. Harvard, Vassar, the University of Minnesota, and the University of Maine are just 4 schools out of over 100 campuses that have divested, contributing to over 1500 institutions that have divested across the world.

The ongoing disaster of climate change is the defining crisis for this generation of students and those that follow. In a national environment where young people are starved for leadership from traditional institutions, students are taking collective divestment action to demand that the university communities of which they are a part take meaningful action on climate change and stop profiting from the businesses that contribute to it.

Fossil fuel divestment is ultimately inevitable, but it is up to college and university administrations whether they will join their students now as leaders of the clean energy future.

As Fossil Fuel Divest Harvard puts it eloquently, “A more just and stable future is in reach and draws closer with each institution that decides to divest from the past and embrace the future.”

Annie Wollmuth is a junior at Duke University majoring in Environmental Engineering and Environmental Science and Policy. She is passionate about the intersection between technical solutions to climate change and their implementation into legislation.