Climate Action: The Carbon Commitment and Sustainability on Campus 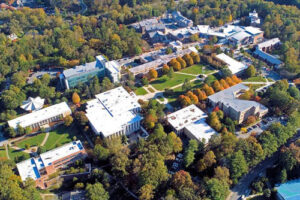 As the climate crisis becomes more and more visible around the globe, student activists have worked here at the University of North Carolina Asheville to take steps to adapt, mitigate, and prepare for its effects. Sustainability has long been a core value at our institution. UNCA has already taken a number of steps to lessen its carbon footprint — implementing sustainable dining practices, placing solar on campus, supporting our entirely student-run Student Environmental Center, placing composting programs in the residence halls, and advancing a bike-friendly campus. 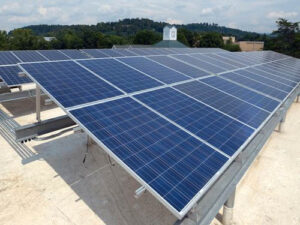 Importantly, UNCA has divested 10% of its endowment from fossil fuels and will potentially divest more in the future. Now students and faculty are strongly advocating for the university to sign onto the Carbon Commitment, a pledge to work to achieve carbon neutrality by 2050 that offers campus sustainability organizers a flexible, effective and measurable way to fight climate change.

More than 400 other universities have signed onto the Carbon Commitment, hosted through Second Nature, and UNC Asheville is looking forward to joining the list of signatories. In conjunction with the Carbon Commitment, we are finalizing a Climate Action Plan that details possible steps and actions to reduce the campus greenhouse gas emissions by each campus department in the short, medium, and long term.

Among the options to move toward lowering our carbon footprint, and eventually carbon neutrality, is using Renewable Energy Certificates (RECs). A Renewable Energy Certificate is a tradable renewable certificate that proves energy has been generated from renewable sources. They are produced when a renewable energy source, (such as wind, solar, hydroelectric, biomass, or geothermal energy) generates one megawatt-hour (MWh) of electricity and can be traded to different owners, creating a lower net amount of carbon emissions. An REC owner can be a business, a municipality, or, in our case, a university.

College campuses have used RECs in the past to lower their carbon footprint, and UNCA is exploring the possibility in conjunction with other projects and initiatives to further reduce emissions. Though complex in their specifics, RECs are a powerful tool both for universities and student activists. In 2007 the North Carolina State Senate mandated regulations for energy production and use called the Renewable Energy and Energy Efficiency Portfolio Standard (REPS) that incentivize standards for investor-owned utilities (12.5% of energy supplied by renewables by 2020) and municipal utilities and electric cooperatives (10% of energy supplied by renewables by 2018). By adopting a policy similar to these standards, UNCA, as well as other institutions looking to implement sustainable practices, can follow the goals and intentions of the state to commit to mitigating climate change, while working toward our stated goal of carbon neutrality by 2050.

Pennsylvania State University is a great example of RECs helping a college campus to reach its sustainability goals in tandem with those of the state. In fact, Penn State is among the largest purchasers of green power in the United States. The university began by buying wind power produced by Community Energy and has since expanded the program to include low-impact hydropower and wind power from other locations in the country. Through this expansion, Penn State has actually been able to save money in its power purchase agreements, as well as receive public recognition.

RECs are particularly attractive to college campuses because of their inherent flexibility. Since universities are typically voluntary REC buyers, they are able to set their own prices and targets. For example, UNC Asheville would be able to set our REC standards to match our Carbon Commitment standards, as well as change those standards and power purchase agreements as the market shifts toward cheaper and more reliable energy sources.

RECs may be varied in their specific regulations and requirements, but they are an effective way to make an impact at any university. As UNC Asheville looks further into options for achieving carbon neutrality, RECs may be the most efficient and cost-effective way to manage our carbon footprint and work toward our goals.

If you are a student organizer looking to increase sustainability efforts at your campus, the Carbon Commitment is a great way to structure your efforts. Through the process of creating our Climate Action Plan and starting on some action projects at UNCA, we have been able to learn about unique (and less publicized) sustainability tactics, such as RECs, as we continue to collaborate with folks across campus to get started on easy projects to improve campus sustainability and quality of life. Whether through RECs or other steps, the Carbon Commitment is a flexible, accessible, and well-grounded approach to sustainability on college campuses– one that student organizers everywhere should consider.

Lindsey is a junior at the University of North Carolina, Asheville, majoring in Environmental Equity and minoring in American Indian and Indigenous Studies. Her RCC Fellowship project is continuing the divestment campaign and working toward a Climate Commitment at UNCA. [email protected]