Childhood Wonder:
In the Footsteps of Rachel Carson 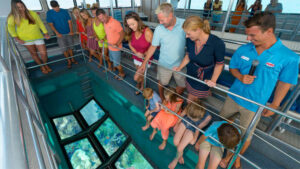 I was 6 years old when I begged my mom to bid on glass bottom boat tickets at a school fair. To my delight, no one else was interested; the tickets were ours. A few weeks later, my dad woke me up early and we drove down to John Pennekamp Coral Reef State Park. We boarded the boat and I settled into my spot, short legs hanging under the silver railings. The engines roared and we were off. Soon, colors began filling the glass panes and I was immersed in the coral city whirring beneath me.

A kaleidoscope of new shapes, alien creatures, and hues beyond my childhood watercolor palette was revealed to me. 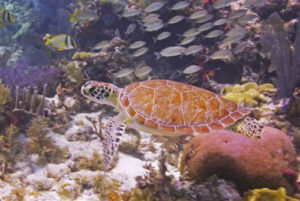 Towards the end of the tour, the guide opened the floor for questions. My hand shot up, just like in my kindergarten classroom. “What gives brain coral its shape?” I asked.

Somewhat impressed, the guide said he would get back to me. After a round of questions, he found me in the crowd. “No one has ever asked me that question,” he said with excitement and a book in his hands. Coral is made of living polyps, he explained, and those tiny creatures come together to form coral reefs.

“So coral is alive?” I asked. “Yes!” he said, enthusiastically flipping the pages to show me corals of all shapes and patterns.

On our way back to the car, I pointed to a shack full of snorkel gear. I told my dad that next time I wanted to see the reef from the water instead of a giant window. He insisted I needed more practice, so the snorkel lessons began.

My dad would watch as I swam from one side of the pool to the other in my child-size snorkel and fins. He taught me that if I wanted to go under, I needed to clear the snorkel when resurfacing. Many mouthfuls of chlorinated water later, I mastered it. I puffed as hard as I could into the mouthpiece and water sputtered out like a whale spout.

Eventually, I received my snorkel-certification—at least by my dad’s standards.

One day, he told me we were going out and we launched our small Cobia from Matheson Hammocks marina. When fish and uneven surfaces started popping up on the depth finder, we stopped and tied a blue corded rope to the back of the boat. This was my moment.

I plunged into the water, small bubbles encasing me and my patterned swimsuit. As they cleared, a new world unfolded. Vibrant fish buzzed about and coral, like heads of yellow and orange cauliflower, decorated the sea floor. Unable to dive to the bottom, I stayed on the surface quietly observing. Hanging on to the rope, I felt frozen in time as life teemed around me.

I wanted to stay forever.

Rachel Carson understood the sensation and the importance of encountering nature through a child’s eyes.

“A child’s world is fresh and new and beautiful, full of wonder and excitement.” she wrote in the Sense of Wonder.

I was filled with this same fascination each time I picked up a new shell for my collection or caught glimpse of dolphins, my favorite animals at the time. One afternoon our boat was joined by a school of dolphins eager to show off their acrobatic talent. Their silver bodies shot through the water like torpedoes and resurfaced in graceful leaps. Their enthusiastic clicks seemed to invite me to come play.

I took these small moments as a given. Now, I feel a deep sense of privilege and responsibility having grown up by the Florida coast.

The Keys to my Heart

Summer weekends often consisted of my cousins and I piling into my aunt’s silver Nissan Armada. Coloring books and my uncle’s playlist served as entertainment on our drives down to Lower Matecumbe Key. I knew we were at our destination when the “pink house” came into view, its name a reflection of the sunbaked peeling paint on the walls. What the house lacked in exterior and interior design, it compensated for with a stunning view of the bay. 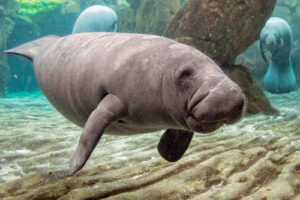 I loved peering my head over the side of the wooden dock, counting how many yellowtail and mangrove snappers were hiding in its shadow. If I was lucky, sometimes I caught sight of manatees slowly grazing in nearby seagrass patches.

During those moments, there was nothing but a dock and an algae-covered boat ramp separating me from the edge of the sea.

Countless hours were spent kayaking along shallow flats, exploring channels nestled between mangrove canopies, and holding my breath as a I searched the sandy bottom for shells and signs of marine life.

Rachel Carson was drawn to these same waters. The ebb and flow of the tide. Starfish traversing sandy flats and sneaky needlefish skidding across the water’s surface.

My eyes, like hers, curiously scanned the shores of the Keys—never waiting long to be surprised by the marine life popping up against the background of an expansive horizon. In The Edge of the Sea, (1955) she wrote:

“I doubt that anyone can travel the length of the Florida Keys without having communicated to his mind a sense of the uniqueness of this land of sky and water and scattered mangrove-covered islands.”

Yet, even as the Atlantic came alive during her time in Keys, Carson’s intuition led her to believe that this ecosystem would not always remain the same. The very foundation of the Florida Keys tells stories about historic coral colonies—their death providing the materials that currently sustain human and marine life.

Carson warned that the mysterious coral coast and mangrove swamp foreshadowed the future.

And I began to see the foreshadowing come to life.

There comes an age where magic and reality untwine, like oil separating from water.

Even as a young child, I knew something was off each time I found a toothbrush or bottle cap in the sand. As I came to understand more about the ocean and the threats to its survival, I could no longer pretend that my favorite places would be around forever. 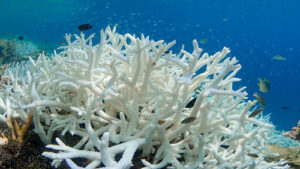 I still appreciated the magic of the ocean’s beauty, but also acknowledged the real impacts of human influence. Suddenly I began noticing the bleached coral fragments littering the sea floor. I started question why our favorite sandbar, “la playita,” was feeling more like a murky hot tub than a refreshing beach. Though I still got excited when manatees swam by, my eyes immediately focused on the propeller marks cutting across their backs.

These issues always existed; it just took me a while to put words to them.

A 2020 report by NOAA revealed that nearly 98% of Florida’s coral cover has been depleted. The remaining reefs face constant pressures from overfishing, climate change, and disease. Our sea is rising at rates up to an inch every 3 years, according to tidal station data off Virginia Key—the island where I attended high school.

When reading statistics and projections like these, it is easy to be filled with fear. I start wondering if reefs will only exist in my memories and GoPro videos. I imagine my childhood home flooded.

Still, no matter how dire a situation may seem, standing by while it happens is not an option.

I never considered myself an environmentalist. For me, attending beach cleanups, switching sunscreens, and studying environmental science was about protecting something I loved.

I wish I could say that I spend all my hours advocating for the ocean, for my home. But the truth is, the older and more knowledgeable I get, the further away from the ocean I feel.

In high school, weekends at the beach were replaced by college applications and filling my resume with summer internships outweighed summer trips to the Caribbean. At Duke, the coast is more than 2 hours away—still closer than most of the country; I was just especially spoiled in Miami.

So, I no longer take moments by the water for granted, nor should you. Every visit to the coast is a gift and an opportunity.

This ocean’s month I am feeling inspired once more. After attending Capitol Hill Ocean Week and meeting with organizations and policymakers who care about the future of our seas, I am reminded of Carson’s wise advice that conservation is a cause that has no end.

Our work is not finished, and the future is not set.

As I anticipate the years to come, I will dwell on my past—holding on to the same sense of wonder that overtook me when I witnessed the vibrant cities that existed below the surface.

The moment that the sea stirred something in me.

Kaylee Rodriguez works on the RCC Coasts and Ocean program with RCC President Bob Musil. She is a senior at Duke University pursuing a major in Public Policy, a minor in Environmental Science and Policy, and a certificate in Policy, Journalism, and Media Studies. Kaylee is a Miami-native and her proximity to the ocean and Everglades sparked her interest in the natural world.