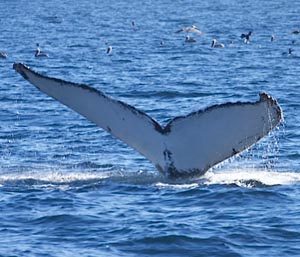 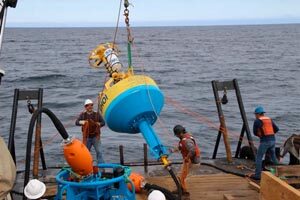 Deploying the acoustic detection system in the Santa Barbara Channel near the shipping lanes in 2019. Benioff Ocean Initiative

Collisions between whales and shipping vessels are especially prevalent in areas where whale habitat overlaps with busy port traffic, such as the Santa Barbara Channel. This 70-mile stretch of water between mainland California and the Northern Channel Islands is a thoroughfare for thousands of cargo ships going to and from the busy ports of Long Beach and Los Angeles. It’s also a hotspot for endangered and threatened whales.

The National Oceanic and Atmospheric Administration has instituted voluntary slow-speed zones, but whale-ship strikes have still been on the rise for the past few years.

To reverse that trend, a group of scientists from all over the country have collaborated on a new project spearheaded by U.C. Santa Barbara’s Benioff Ocean Initiative. Whale Safe, a technology-based mapping and analysis tool, provides near real-time data on whale activity in the Santa Barbara Channel in the hope of reducing fatal whale-ship collisions.

We spoke to Morgan Visalli, the science lead at the Benioff Ocean Initiative, about how the technology works and what the public can do to help hold shipping companies accountable. 10-14-20