“This notion that ‘science’ is something that belongs in a separate compartment of its own, apart from everyday life, is one that I should like to challenge.” — Rachel Carson accepting the 1952 National Book Award for The Sea Around Us. 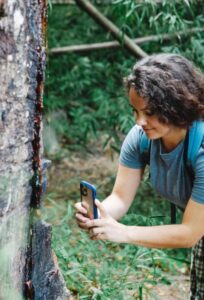 Click. A hiker captures a photo of a budding Red Buckeye (Aesculus pavia) in the Appalachian Mountains. Up the coast, someone on an early morning walk catches glimpse of a horseshoe crab and takes a quick pic.

Bing. Their photos are uploaded, but not for likes on social media. They just contributed to a public database for scientific research and monitoring.

In a world that is increasingly connected via technology, public participation in the scientific process is easier than ever. Citizen science, also known as community science or volunteer monitoring, refers to research conducted by amateur scientists. Us.

The exchange of ideas between ordinary people and the scientific community can simultaneously strengthen research and inspire a sense of responsibility among the public.

What is Citizen Science

Though the term “citizen science” was not officially coined until the 1990’s, the practice is not new. Early in our country’s history, Thomas Jefferson recruited volunteers across states to observe and record weather patterns. Today, many institutions, including the National Weather Service, include observations by people across the country in their datasets.

In the late 1800s, ornithologist and schoolteacher Wells Woodbridge Cooke started a program to track bird migration patterns. Together he, and other volunteers, collected data on bird arrivals and departures in the Mississippi Valley. His efforts expanded into the North American Bird Phenology Program—one of the first federal programs for studying birds. The National Audubon Society followed suit in the early 1900s, establishing their Christmas Bird Count program which continues to exist today.

In the last 10 years, citizen science projects have dramatically increased as a result of growing trust in the reliability of the data, improvements in technology, and more awareness on its existence.

Researchers saw a rise in citizen contributions during the pandemic, helping bridge gaps as shut downs and isolation protocols hindered scientists from conducting their own monitoring. 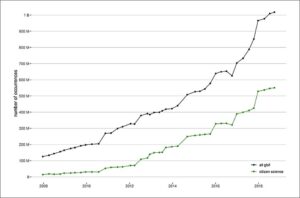 Public contribution to science initiatives takes various forms; from biodiversity tracking, to collecting water samples, to communities posing their own research questions. Not only does this collaboration encourage innovation in the scientific community, but some also argue that it can be a tool for fostering environmental stewardship.

Inviting people to participate in scientific research, educates and engages them in a way that reading a news article cannot. It allows for direct interaction with environmental issues and encourages people to go out in the natural world and make their own observations—inspiring the sense of wonder that Rachel Carson argued was vital for environmental action.

Putting it into Practice

On the coast of South Florida, an eager team piles into the dive boat. Their mission: planting new coral fragments.

In 2015, the Rescue a Reef program was launched by Dr. Diego Lirman, Associate Professor at the University of Miami Rosenstiel School. 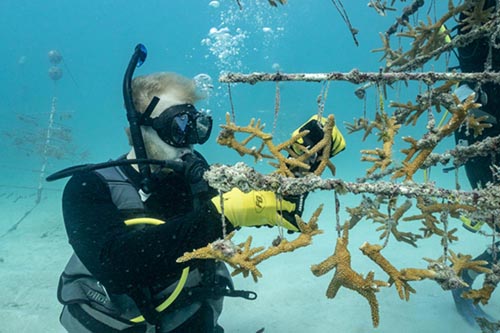 “We are essentially growing corals in these underwater nurseries by the thousand, as if we were underwater farmers,” Dalton Hesley, Program Manager at Rescue a Reef. (Photos by Rescue a Reef)

As an extension of their research, Rescue a Reef invites the community to participate. Volunteers with strong swimming and diving skills are taught how to use epoxy and cement to attach these coral fragments to a substrate on the seafloor.

In addition to the expeditions, they offer laboratory tours and conduct public workshops.

They consider this aspect of their program essential to fostering concern and care for reefs. The program centers on education because reefs are a resource for everyone. When individuals interact with these ecosystems on a personal level, they are more likely to care about them.

Even a single dive or workshop can inspire the next advocate.

“They end up being stewards and individuals that can be champions for coral reefs,” says Hesley. “Then it’s not our job anymore because we have a community of coral advocates, that probably have more impactful voices than we do.”

As citizen science projects have increased, so have criticisms regarding its accessibility.

The majority of people who participate in citizen science projects are white, with professional degrees and high incomes. In a recent survey, responses showed that among three different citizen science initiatives, 95% were white.

Some advocates are pushing for a shift away from the term ‘citizen’ science to be more inclusive of those without legal citizenship and to center communities rather than individuals. Whether rebranding is enough to make the movement more equitable is debatable, according to a group of North Carolina State researchers. They suggest ‘centering the margins’—or communities traditionally underserved by science—and increasing diversity in project leadership, not just participants.

Making an active effort to include marginalized communities and prioritize their research needs is a necessary step for the growing movement.

“Citizen science project designers must grapple with issues of equity, diversity, power, and inclusion,” a report by the U.S. National Academies of Sciences, Engineering, and Medicine in Washington, D.C stated.

“This notion that ‘science’ is something that belongs in a separate compartment of its own, apart from everyday life, is one that I should like to challenge,” Carson said when accepting the 1952 National Book Award for The Sea Around Us.

When people start believing that science is for everyone, they can begin to understand that the environment is too. In recognizing that their personal contributions to science are valuable, they may realize that individual environmental stewardship matters.

And that is an important step for getting people to care.

Kaylee Rodriguez works on the RCC Coasts and Ocean program with RCC President Bob Musil. She is a senior at Duke University pursuing a major in Public Policy, a minor in Environmental Science and Policy, and a certificate in Policy, Journalism, and Media Studies. Kaylee is a Miami-native and her proximity to the ocean and Everglades sparked her interest in the natural world.