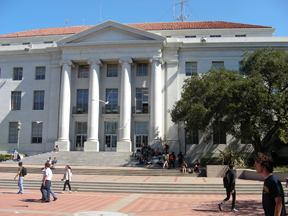 Musil spoke at the opening reception of the ASEH conference dedicated to Rachel Carson and in memory of the 50th anniversary of her 1964 death from breast cancer. Five lucky ASEH members won copies of Rachel Carson and Her Sisters that were raffled off before Musil signed copies sold at the conference. Rachel Carson’s only trip to California was to the Bay Area in October 1963 for a major speech and a look at Muir Woods with the Sierra Club’s David Brower. Dr. Musil and other ASEH members recalled Rachel and Silent Spring as they birded around the Bolinas Lagoon and Stinson Beach.

At Berkeley, Dr. Musil spoke at an afternoon event open to the public and sponsored by the Departments of Environmental Science, Policy, and Management, Women and Gender Studies, and Ethic Studies. Berkeley also signed on to be a Rachel Carson Campus.