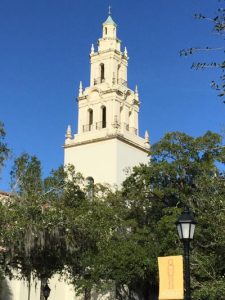 Musil spoke to students and faculty about “Rachel Carson and Her Legacy for Florida” and explained how Carson made numerous visits to Florida, including the Everglades and the Florida Keys, which became the basis for her best-selling book, The Edge of the Sea. But Carson’s legacy goes beyond caring for the oceans and her exposé of DDT and other chemicals in Silent Spring, Musil said. He explained how the RCC has a number of contemporary projects that reflect Carson’s pioneering warnings. Rachel Carson was also concerned with factory farming which is widespread in Florida, especially with a large number of dairy and chicken Concentrated Animal Feeding Operations (CAFOs). Carson also wrote extensively about the dangers of nuclear weapons, testing, and radioactive waste and would have been opposed to the remaining nuclear power plants in Florida, including the St. Lucie Nuclear Power Plant. It sits on the Atlantic shore that sucks endangered sea turtles into its intake valves. Carson was also aware of and concerned about the earliest reports and warnings about global climate change through her colleague, Roger Revelle. Revelle with Charles Keeling held conferences and wrote papers that reached Carson and the Kennedy Administration. Florida has already shown its vulnerability to climate change with rising sea levels, stronger hurricanes, and increased heat waves. Thus, Carson would likely have supported efforts, as does the RCC, to prevent fracking and off-shore drilling in Florida, to close remaining coal-fired utilities and to support the Obama Administration’s Clean Power Plan.

Rollins has a strong student environmental group, EcoRollins and growing campus sustainability efforts that include bicycle programs and an urban farm. The Rollins Coalition for Sustainable Investment is also working to convince Trustees to eliminate fossil fuel holdings in the endowment and invest in clean, renewable energy.