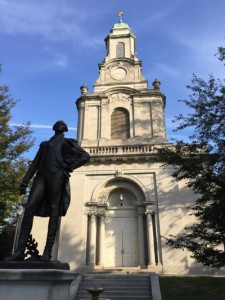 Lafayette College is nestled above the Delaware River on College Hill, the leafy section of Easton, Pennsylvania, about an hour north of Philadelphia and less than an hour and a half west of New York City. According to Rachel Carson Council President, Dr. Robert K. Musil, who lectured, taught class, and met with faculty and students there in October, the biggest recent change on campus since he attended the Inauguration of President Alison Byerly in the fall of 2013 is a strong emphasis on sustainability.

Since Byerly, an English literature scholar and former Provost of Middlebury, arrived as Lafayette’s seventeenth president and the first woman to hold the post, sustainability has been put at the center of the college’s core values. A stunning series of campus initiatives has become visible, including LEED-certified buildings, a wind turbine and solar panels, student projects, water conservation, and a two-acre sustainable garden known affectionately as LaFarm. LaFarm even has a professional college farmer, Sarah Edmonds, (technically the Metzgar Environmental Projects Coordinator) who supports student research projects and the Sustainable Food Loop (SFL). The SFL provides organic produce to the college’s Bon Appetit Dining Service, collects and composts organic waste from dining halls for fertilizer, and sells produce at a farm market in the summer.

But importantly, according to Musil, Lafayette — a selective liberal arts college that features strong engineering — has also increased its curricular and intellectual emphasis on sustainability. In 2015, Lafayette created an entire set of programs, events, and seminars around the required reading for incoming students of The Sixth Extinction: An Unnatural History by the noted author and New Yorker writer Elizabeth Kolbert. Kolbert gave an inspiring talk on campus which coincided with major multi-media events such as an exhibition at the Williams Art Gallery on the extinction of the passenger pigeon. Other recent sustainability speakers have included Sandra Steingraber, author of Living Downstream: An Ecologist’s Personal Investigation of Cancer and the Environment, and a leader in national efforts to prevent fracking. 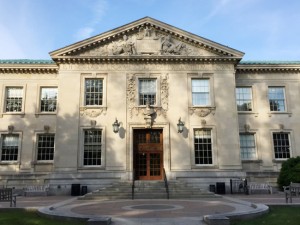 CC’s Bob Musil spoke to a packed auditorium in the Kirby Hall of Civil Rights on “Rachel Carson and Her Legacy for Today.” Carson’s legacy, Musil explained, obviously includes the continuing problem of pesticides first convincingly spelled out for the public in Silent Spring. The adverse effects of pesticides and other toxic chemicals, including such widespread contemporary products as Roundup®, have been central to the work of the RCC since it began in 1965 after Carson’s death.

Surprisingly, Musil said, Rachel Carson was also concerned about global warming which she became aware of through early reports and work by Roger Revelle and others that came to the attention of the Kennedy Administration. Carson surely would have been concerned and spoken and written about the dangers of fossil fuels and today’s issues such as ocean drilling and fracking. It also remains little known, Musil added, that Rachel Carson was also a supporter of animal welfare and warned about the health dangers of factory farms in her introduction to Ruth Harrison’s 1964 book, Animal Machines. It is why the RCC is organizing today with local environmental and community groups against huge industrial hog farms in North Carolina. Noting the near meltdown of reactors in Fukushima, Japan, and the recent negotiations to prevent Iran from obtaining nuclear weapons, Musil also told the Lafayette audience that Rachel Carson actively wrote and spoke about the dangers of nuclear weapons, power, and radioactive wastes. Carson was well versed in the health and ecological effects of radiation from the time she read government reports of the atomic bomb tests at Bikini Atoll in 1946 and became close to early anti-nuclear leaders like Norman Cousins and Barry Commoner.
While at Lafayette, Musil also met with student environmental leaders at their initial meeting to form a new, campus-wide sustainability coalition to coordinate and enhance the efforts of numerous student environmental organizations. The group is planning a major campus rally and other events this Fall and is working to have Lafayette’s first Sustainability Coordinator hired as soon as possible. Emily Heller-Coffey, who organized the meeting after hearing Princeton Sustainability Director Shana Weber speak at Lafayette, is optimistic that with supportive faculty and a sympathetic President, Lafayette will soon have not just a beautiful campus, but one that ranks as a sustainability leader.