Dr. Bob Musil, President and CEO of the Rachel Carson Council, was the distinguished Polly Walker Ecology Fund lecturer at the Johns Hopkins Bloomberg School of Public Health (JHSPH), in Baltimore, Maryland. Musil was the keynote luncheon speaker for a two-day event for Hopkins alumni honoring Rachel Carson and other noted women from the School of Public Health. He was introduced by Dr. Marsha Wills-Karp of the Department of Environmental Health Science.

Dr. Musil is a 2001 graduate of the JHSPH where Rachel Carson was a Research Assistant to the famed biologist and geneticist, Dr. Raymond Pearl. Carson worked with Pearl and his wife, Maud DeWitt Pearl, managing editor of Human Biology, while she pursued graduate studies in biology at Hopkins and the Woods Hole Biological Laboratory on Cape Cod from 1929-1934.

Musil spoke to a full auditorium at the JHSPH where he noted wryly he presented his Master’s thesis on the health effects of global climate change in Maryland in the exact same spot, but with more trepidation despite a much smaller audience. Musil lectured about his book, Rachel Carson and Her Sisters, focusing on Rachel Carson and her time at Hopkins and other distinguished women of science connected to Carson and the JHSPH. Among them was Dr. Anna Baetjer, one of the pioneers in women, health, and the environment, who was an Assistant Professor and popular teacher while Carson was a student. 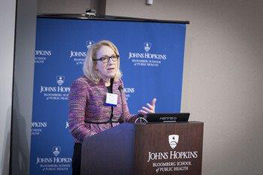 Musil also described the achievements of contemporary Hopkins women in the tradition of Rachel Carson including Dr. Devra Davis, head of the Environmental Health Trust, author of When Smoke Ran Like Water, and a specialist in the environmental causes of cancer. Davis is also the subject of chapter six in Rachel Carson and Her Sisters. Musil also praised Dr. Lynn Goldman, Dean of the George Washington School of Public Health, and a former Assistant Administrator of the EPA. Dr. Goldman led a panel of JHSPH women after Musil’s luncheon address.

The event was sponsored by the Center for a Livable Future (CLF) at the School of Public Health. The CLF, founded and headed by Dr. Robert Lawrence, is a research and policy think tank that focuses on environmental health problems such as industrial scale animal farming and global climate change. Dr. Lawrence taught Musil at Hopkins and also was taught and mentored at Harvard Medical School by Dr. Harriet Hardy, another pioneer in environmental health profiled in Musil’s book.

The Johns Hopkins School of Public Health and its Center for a Livable Future are now linked to the Rachel Carson Council campus network and will share information, resources, and collaborate on advocacy projects of mutual concern.