Rachel Carson Council President and CEO, Dr. Robert K. Musil, was a Woodrow Wilson Visiting Fellow for a week at Furman University in Greenville, South Carolina. Furman, a highly-rated national liberal arts college, is also a leading green campus. It has also become one of the most recent to join the growing Rachel Carson Council Campus Network (RCCN). Furman, founded in the nineteenth century to train ministers, moved to its current campus after World War II when Greenville was primarily a textile center whose polluted local river changed colors depending on which dyes were being used in the mills. 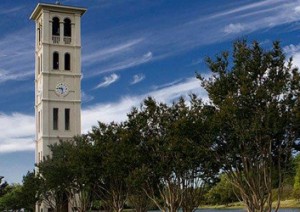 When the textile industry moved overseas, Greenville slumped and didn’t recover until the last few decades when it has been transformed into a cosmopolitan center resembling a small Austin, Texas, with a touch of Palo Alto. Furman, too, has been transformed into a truly beautiful campus. Furman’s focus on the environment features the David E. Shi Center for Sustainability named in honor of Furman’s former long-time President, David Shi (pronounced “Shy”), a historian and environmentalist who became a charter signer of the American College and University President’s Climate Commitment. The Shi Center sits alongside the campus lake and has a Green Belt of three sustainable houses for students who compete to live there, a replica of Thoreau’s Walden cabin, organic gardens, solar arrays, high-speed compost compacters, and an award-winning energy-efficient home that houses the Center. It was originally designed as a model home by Southern Living to show that sustainable houses could be truly elegant, comfortable and stylish

Musil was hosted for his week at Furman by the Riley Institute of Government, Politics and Public Leadership. The Institute is named after Richard W. Riley, former U.S. Secretary of Education and Governor of South Carolina, who serves as its President. The Riley Institute, affiliated with the Furman Department of Political Science, offers an array of public programs and conferences and brings leading policy makers and experts like Bill Clinton, Christine Todd Whitman, and others to campus.

While at Furman, Musil met with Furman’s new President, Elizabeth Davis, who vowed in her inaugural address to maintain and build on Furman’s leadership in sustainability and service. Musil also gave a campus-wide public lecture on Rachel Carson’s legacy for today, met with student groups, and taught classes from environmental writing to chemistry for sustainability and global climate change as a threat to national security for the Furman Army ROTC. Musil also spoke about environmental health issues at the Greenville campus of the University of South Carolina Medical School and offered a Mere Christianity Forum at Vista House, an intentional, green community house for Furman students