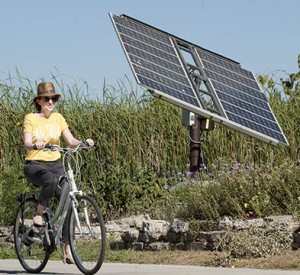 The Rachel Carson Council sponsored its second California tour during Earth Week in Los Angeles and San Diego as part of its 50th-anniversary commemoration of Rachel Carson’s death from breast cancer on April 14, 1964.

RCC President and CEO, Dr. Robert Musil, was the featured speaker on Earth Day at Cal Poly Pomona in Pomona, CA. Cal Poly has been listed by the Princeton Review as one of the nation’s leading green colleges. Musil was sponsored by the College of Environmental Design and the Department of Biology which educate future green architects, landscape architects, urban planners, and biologists specializing in organic agriculture, gardening, and sustainable foods. The College of Environmental Design also includes the arts, humanities, and graphic design in its interdisciplinary approach to creating a sustainable and healthy future.

Dr. Musil spoke about Rachel Carson’s belief that a sense of wonder, awe, and imagination are essential to developing a reverence for life and its interconnectedness. Musil also stressed the importance of practical and applied scientific knowledge. He described women in California, before and after Rachel Carson, who used their scientific knowledge, sustained activism, and ability to write to engage the public. A number of them, including the writers Mary Austin (The Land of Little Rain, 1903) and Gene Stratton-Porter (A Girl of the Limberlost, 1909) are profiled in Musil’s Rachel Carson and Her Sisters (Rutgers 2014).

Musil was invited to Cal Poly by Dr. Michael Woo, Dean of the School of Environmental Design, a former LA mayoral candidate, who also supports strong civic engagement and advocacy initiatives for students. Musil was introduced to the Earth Day audience by Associate Dean of the College of Environmental Design, Julianna Delgado, an urban planner and designer. Cal Poly Pomona joined the Rachel Carson Campus Network, and brings special expertise to the RCC’s work.