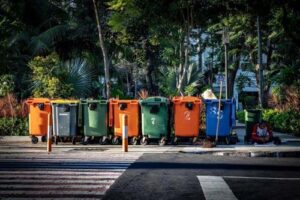 Debates on climate action often center around one question: Whose responsibility is it? More times than not, the burden of responsibility falls to the individual. You and I are expected to engage in sustainable practices such as taking shorter showers, buying local, and using reusable bags and water bottles. In theory, such efforts, as long as they are done by a majority of the population, can add up and make a significant dent in carbon emissions. Sustainable practices are also thought to “catch on” with family and friends, making the task of tackling climate change and its associated emissions within reach.

However, this growing call for personal responsibility changes the optics and dynamics of the climate fight. It not only makes climate action seem more controversial and politicized, but it also absolves larger entities like governments and companies of their responsibility.

Released in 2017, the Carbon Majors Report found that just 100 companies were responsible for 71% of global greenhouse gas emissions since 1988. Fossil fuel companies such as ExxonMobil, Chevron, and British Petroleum (BP) were all found to be within the top 15 producers of greenhouse gas emissions from the period of 1988-2015.Even more recently, in 2019, it was found that 20 fossil fuel companies were responsible for a third of all carbon dioxide and methane emissions worldwide, with approximately 480 billion tons of CO2 emitted since 1965. After reaching out to these 20 corporations, the Guardian received comments back from just eight. Some argued that they were not directly responsible for how extracted fossil fuels were used by consumers; others claimed that the environmental impacts of fossil fuels were not “known” that far back, further removing them from responsibility. These comments again reveal the pressure for individual action and personal responsibility for climate change. 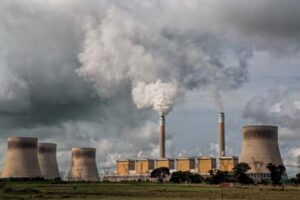 In 28 qualitative interviews with LGBTQ+ college students across 5 large, public universities in Appalachia, most found themselves at the center of this conundrum: wanting to do something individually but also understanding that the climate crisis is bigger than them.

“I’m in the middle of saying ‘I can make a small difference by buying in bulk and/or buying package-less’ versus ‘This shouldn’t be responsibility, because it should be on the corporations who make it and are mass producing these things.’ Navigating that for yourself is what I have a struggle with, to be in between.” Interview 12

“I think that there’s this message that climate change comes down to individual responsibility. And I’m not saying that’s not important, I think it’s important for people to live as sustainably as their means allow them to. But there’s a lot of ignoring the fact that most of our waste and most of our pollution is coming from these huge corporations, and they’re not being held accountable. And there aren’t laws in place that are preventing them from creating all this pollution. I think corporations needs so much more accountability than they have right now.” Interview 21

“A lot of people put climate change onto the general population when not a lot of other people who don’t research into this don’t realize that we’re forced into this capitalistic society where we don’t have to, but we’re really pushed, into buying products from these huge companies who also hurt the environment. Because unfortunately here in the US, you can’t live without companies unless you just go live in the middle of the woods and call it a day. Interview 22 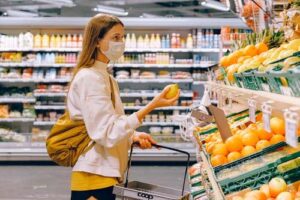 “A couple weeks ago, I bought a big tub of applesauce because I thought, ‘Oh, it’s less packaging.’ And then I totally couldn’t finish it and I wasted a bunch of it. Weighing the potential to waste food if you open a big package, versus buying the individually packaged ones which waste more. [Set the rest of this quote off or enlarge or bold, whatever] Those little decisions are what I’m really referring to, and you add them all up and it does make an impact, but when 70 or 90% of carbon emissions are coming from about 10 companies, it seems like there are bigger problems, bigger fish to fry.” Interview 14 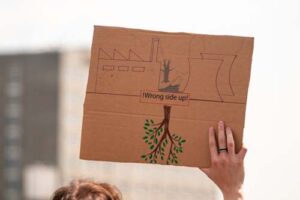 These excerpts showcase a growing frustration amongst college students with corporate inaction. Even with COVID-19 pandemic travel restrictions and a drop in global greenhouse gas emissions of 7% from 2019 emission levels in 2020, it is assumed that emissions are expected to rebound in 2021 with the introduction of mass vaccinations. As economic recovery slowly creeps upward, it is imperative that as a collective, citizens band together to demand more from companies and governments. Government actions poised to stimulate the economy must also help lower emissions, keep companies responsible, and tackle climate change. Now is the time for larger entities to step up and invest in clean energy and the shift to renewable energy, to ensure a healthier planet for all.

As shown with national organizations like 350.org, the RCC, and others, as well as global movements such as Greta Thunberg’s Fridays for Future Climate Strikes, mobilizing individuals to go beyond personal, sustainable practices such as recycling, buying in bulk and using less, but to demand serious accountability and responsibility of larger players in the climate crisis, is necessary. Only then can we imagine a future were global emissions decrease, not only due to a pandemic, but because of purposeful climate action.

Brandon Rothrock is working on a Master of Arts in Geography and a Graduate Certificate in Women’s and Gender Studies at theWest Virginia University. His RCC project is on climate justice and the LGBTQ+ community. [email protected]