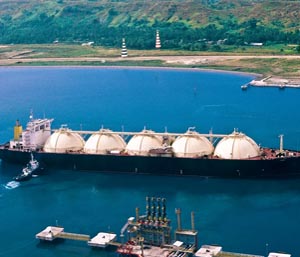 The fossil fuel giant Shell — which doesn’t want you to think of them as an oil company — recently announced a special shipment of fracked gas to Europe. There’s nothing inherently unique about the liquified natural gas (LNG) business, but the company — along with the supplier Cheniere — want you to think of this liquified natural gas delivery as different: this shipment of gas was deemed “carbon neutral.” This isn’t the only instance of this happening; earlier this year, Occidental Petroleum sold a shipload of crude oil it, too, deemed 100 percent “carbon neutral.”

How exactly does a massive shipment of crude oil, or fossil gas fracked in the United States and shipped across the Atlantic, manage to get a “carbon neutral” label? The greenhouse gas emissions associated with this drilling is not absorbed or erased. They are zeroed out on paper, thanks to an accounting trick: Using credits from carbon offsets.

These emissions illusions are key components to corporate climate pledges. Fortune 500 companies, including many fossil fuel polluters, have raced out to announce “net zero” commitments, often accompanied by slick self-congratulatory advertising. But these schemes are more often about image management than pollution reduction; Shell, after all, plans to grow its fossil fuel business while making “net zero” promises. 06-13-21