Rachel Carson’s Maine: Wonders at the edge of the sea never grow old 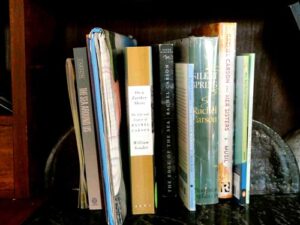 Rachel Carson memorabilia has a place of honor at the Newagen Seaside Inn in Southport, Maine.DAVID LYON

EAST BOOTHBAY, Maine — At Ocean Point, the Atlantic Ocean coils like a fighter preparing a roundhouse punch, then pummels the gargantuan slate shore with thunderous waves. Tourists who flock to this scenic coastal walkway at the southern tip of East Boothbay focus their mobile phones and cameras on the smashing surf. The scene encapsulates the quintessential ‶rocky coast of Maine.″

But when the sea relents and the tide withdraws, the pools left behind in the rock hollows teem with life. Rachel Carson, perhaps the mid-20th century’s most articulate advocate for the environment, was drawn more to these tidepools than to the dramatic bluster of the surf. The intertidal oases contain a universe in a teacup. They are full of periwinkles, marine worms, tiny green crabs, Irish moss, and even darting minnows.

At the edge of the sea, she wrote, “the drama of life played its first scene on earth and perhaps even its prelude; where the forces of evolution are at work today, as they have been since the appearance of what we know as life.”

Rachel Carson was one of Maine’s most perceptive ‶summer people.″ She began visiting the state just after World War II and in 1953 built a cottage in Southport, an island community just south of Boothbay Harbor. From this base, she researched and wrote her 1955 book “The Edge of the Sea” and later worked on “Silent Spring” near the end of her life. 09-08-21