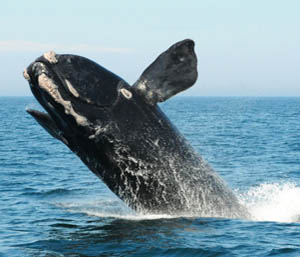 At Sea and in Court, the Fight to Save Right Whales Intensifies 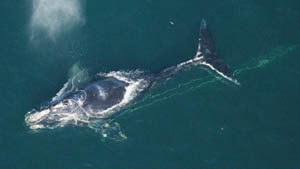 Artie Raslich has been volunteering for seven years with the conservation group Gotham Whale, working on the American Princess, a whale-watching boat based in Sheepshead Bay, Brooklyn. In that time Raslich, a professional photographer, has glimpsed a North Atlantic right whale, the world’s rarest cetacean, only twice. The first time was an unseasonably warm December day in 2016, when he managed to snap a striking image of a right whale’s dark tail against the backdrop of the New York City skyline. “That was a beautiful shot,” Raslich says, proudly. The second was just a few weeks ago, in early October, roughly 3 miles east of Sea Bright, New Jersey.

Unfortunately, both whales had suffered an increasingly common fate: They were entangled in fishing ropes and were likely to die.

The North Atlantic right whale is one of the most endangered species on the planet. Scientists announced last month that there are only about 360 of the animals left, down roughly 50 from the previous year’s survey. They live along the East Coast, from northern Florida to Canada, where the 50-foot-long, 140,000-pound leviathans must navigate through millions of commercial fishing lines — primarily lobster traps — and one of the world’s most crowded shipping channels. Too often they become tangled in those lines, or are struck by a ship. The fight to save them, led by biologists and conservation groups, has grown urgent — in the water and in the courts.

Scientists are using cutting-edge acoustic technology to monitor right whales and identify where they are coming into contact with ships and fishing lines; rescue teams in the United States and Canada are scrambling to disentangle animals when they’re spotted; and environmental advocates are making significant headway suing state and federal agencies to enforce provisions of the Endangered Species Act (ESA) and Marine Mammal Protection Act, which were written to protect the whales from extractive industries like lobster fishing. 11-17-20