The other day I had a conversation with a childhood friend about the negative environmental effects of the agriculture industry, as one does when visiting home for the holidays. And although the two of us don’t see eye to eye on most important issues, we had similar ideas about how this industry harms individuals and the environment. She rallied behind the idea, however, that we shouldn’t worry about potential consequences because environmental regulations exist to decrease pollution. While it’s true that regulations exist, are these regulations effective enough to protect our water from manure-based pollution? 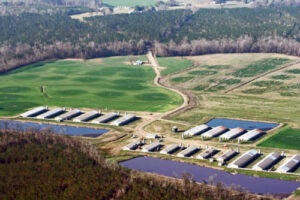 One of the ways CAFOs (concentrated animal feeding operations), or factory farms, contribute to the pollution of our nation’s water is through improper manure management. Lagoons, man-made basins meant to store excess manure, are one of the most common methods of storing manure produced on CAFOs. Manure stored in lagoons undergoes a process known as anaerobic respiration, which results in the release of carbon dioxide and methane. Some negative environmental effects of lagoons are due to overflow caused by improperly built lagoons or weather conditions such as excessive wind or rainfall. But emissions of harmful gasses like ammonia, hydrogen sulfide, carbon dioxide, and methane are relatively constant (with some seasonal discrepancies) given the nature of anaerobic lagoons. 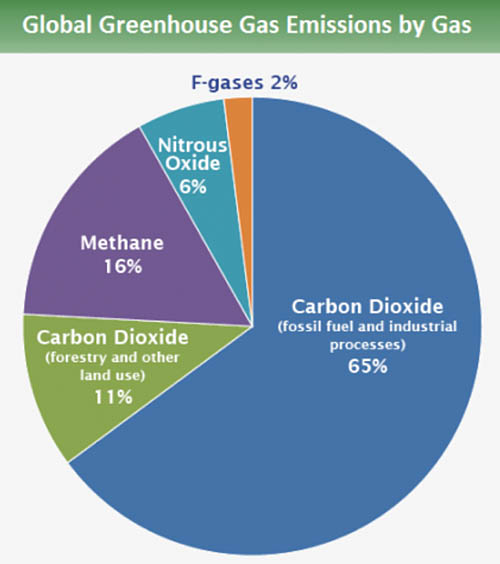 The production and release of these substances is a large contributor to total greenhouse gas emissions. According to the EPA, 16% of total global greenhouse gas emissions come from methane, much of which stems from agriculture. Although manure produced on CAFOs can be used productively as fertilizer for crops, there is often more waste produced than what can be used. As a result, excess manure stored in lagoons may run off into surface water and contaminate waterways with nutrients such as nitrogen and phosphorus. This problem contributes to the eutrophication (or an excessive richness of nutrients) in rivers, lakes, and estuaries, as well as to hypoxic zones in areas like the Gulf of Mexico and the Great Lakes.

In an effort to decrease these pollutants, the EPA regulates the pollution levels of CAFOs as part of current legislation under the Clean Water Act. The EPA has acknowledged that past regulations were insufficient at preventing water pollution caused by agriculture, and now requires that CAFOs develop nutrient management plans and obtain permits to discharge manure.

Although these regulations are beneficial, there is a great deal of discrepancy involved. Amidst attempts to maintain farmers’ privacy, the EPA faced a large amount of pushback against their efforts to collect specific data on each CAFO’s location and number of animals in order to determine which farms need to obtain a permit. While some argue that the negative environmental effects of CAFOs constitute this information as crucial public information, data collection is ultimately left up to individual states. And while most states have a good handle on how many CAFOs are operating on their land, Iowa’s Department of Natural Resources 2016 annual report noted that nearly 5,000 feeding operations in the state require further investigation in order to determine if they should obtain permits. Of these 5,000, the Iowa DNR stated that around 1,266 most likely qualify as CAFOs but are not on the EPA’s radar. This means that these possible CAFOs are potentially discharging unregulated amounts of pollution into Iowa’s water.

For the CAFOs that are under scrutiny of the EPA’s regulations, when a problem is identified, farms are required to implement appropriate solutions and often pay a fine. As an example, a list of manure discharge violations in Iowa (the state with the largest reported number of CAFOs) from 2014-present is available here. Without the ability to fully regulate all CAFOs in the United States, however, it seems nearly impossible to control all dangerous manure discharges and emissions. And with the drastic rollbacks to the EPA during the Trump administration, the list of unregulated sites only continues to grow.

Regardless of the number and intensity of environmental regulations placed upon the agricultural industry, problems still exist. Improvements can always be made, and must be made, in order to secure a safer environment for the future of our nation. It is not in our best interest to accept that current regulations are adequately addressing all the problems we face; we must continually strive for a cleaner future.

Emma Chervek is a senior at Central College studying English, Spanish, and Secondary Education to become an environmental journalist. Her RCC Fellowship Project is reporting on factory farms and sustainable alternatives through a new podcast series, “The Real Steaks: the True Cost of the Agriculture Industry.”